What Brown v. Board of Education Should Have Said: The Nation’s Top Legal Experts Rewrite America’s Landmark Civil Rights Decision

Edited with an Introduction by Jack M. Balkin

Brown v. Board of Education, the Supreme Court’s landmark 1954 decision ordering the desegregation of America’s public schools, is perhaps the most famous case in American constitutional law. Criticized and even openly defied when first handed down, in half a century Brown has become a venerated symbol of equality and civil rights.

Its meaning, however, remains as contested as the case is celebrated. In the decades since the original decision, constitutional interpreters of all stripes have found within it different meanings. Both supporters and opponents of affirmative action have claimed the mantle of Brown, criticizing the other side for betraying its spirit. Meanwhile, the opinion itself has often been criticized as bland and uninspiring, carefully written to avoid controversy and maintain unanimity among the Justices.

As the 50th anniversary of Brown approaches, America’s schools are increasingly divided by race and class. Liberals and conservatives alike harbor profound regrets about the development of race relations since Brown, while disagreeing heatedly about the proper role of the courts in promoting civil equality and civil rights.

In this volume, nine of America’s top constitutional and civil rights experts have been challenged to rewrite the Brown decision as they would like it to have been written, incorporating what they now know about the subsequent history of the United States but making use of only those sources available at the time of the original decision. In addition, Jack Balkin gives a detailed introduction to the case, chronicling the history of the litigation in Brown, and explaining the current debates over its legacy.

What the Critics have Said

“An excellent overview of the Brown decision that will appeal to all readers.”

“Yale Law School professor Balkin and a stellar list of constitutional scholars here rewrite the famous Brown v. Board of Education decision, which outlawed public school segregation. Using only materials available to the Supreme Court in 1954, the authors attempt to clarify the meaning of Brown and strengthen its principles for future generations. The book consists of three introductory chapters by Balkin explaining the history of the Brown case, theories of why it was decided, and a guide to the revised opinions. Balkin’s contributors cover the range of constitutional analysis, from original intent (Michael McConnell) to judicial minimalism (Cass Sunstein), to judicial activism (Drew Days). The work concludes with the original Supreme Court opinions and comments from the contributors defending their own opinions. In all, this is a stimulating debate of a great case. For all law collections.”

From Kirkus Reviews
“Justice, for a day. Balkin’s concept is so brilliantly obvious that it’s amazing no one’s tried it before: He’s snared nine prominent legal academics, given them a politically juicy case (Brown v. Board of Education, which declared school segregation unconstitutional), limited them to the materials available in 1954, and told them to come up with the opinions they would have produced if they’d been members of the Court. The resulting pastiche is, for the most part, invigorating. Freed by the anachronism of mid-century role-playing, the eminent professors who write here are forced actually to write… . Passionate, intelligent, accessible, and eloquent. If only the real court would follow suit.”

From Professor Randall Kennedy, Harvard Law School
“A remarkable collection of writings. The eminent scholars it features articulate with insight and passion a wide range of views. No other book better relates the Supreme Court’s landmark decision of 1954 to the debates and anxieties of our own time.” 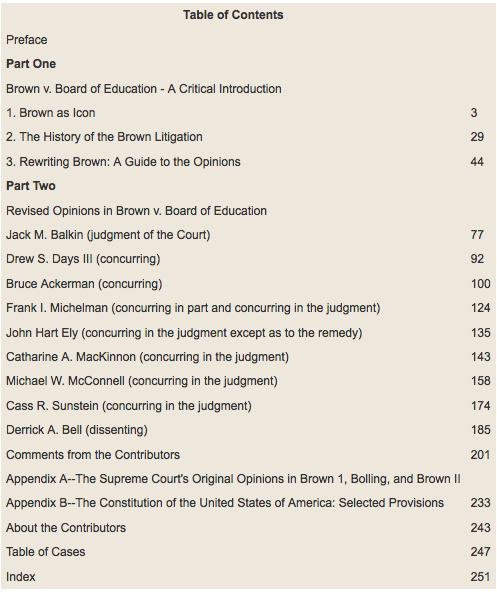 Purchase a copy of What Brown v. Board of Education Said

From Barnes and Noble